One of the most controversial edition of New York Fashion Week presented a wide-ranging calendar, despite of the numerous defections of “big names”.  Not only elegance and classy minimalism were seen on catwalks, but also weird proposals and strong concepts. Here the 10 most extravagant and innovative outfits for next fall/winter 2018-19 at NYFW.

136 fashion shows, many presentations and events, 3 days for menswear and 7 for womenswear (for the first time in a unique kermesse). These were the number of the last New York Fashion Week.

That was characterized by important and not-positive changes of direction, starting with the defections of important fashion brands that previously were usual to present their collections in NY: Proenza Schouler, Rodarte, Altuzarra, Thom Browne already moved to Paris, Delpozo moved to London and Tommy Hilfiger to Milan while Alexander Wang will present his creations in June and December during the days dedicated to Resort and Pre-fall collections (changing also timing and methods of product distribution).

All things that should make us all think about the entire system of fashion weeks, in times of social media and online shopping. However, speaking about what we’ve seen on catwalks, NYFW is demonstrating also a change in terms of style. No more only classy brands and minimal or commercial-like collections, but a descrete number of weird proposals by big names and cutting-edge designers. Maybe not so theatrical as the London or Parisian fashion shows, but interesting and attractive nonetheless.

Here the hit-parade of the 10 most innovative and strange outfits seen at NYFW Rtw Fall 2018-19.

Provocative, excessive, totally free, this is the visual language used by the designer Rio Uribe of the brand Gipsy Sport. The metal wire bra recalls the 90s and a certain gothic cyber-punk culture seen in those years. A weird concept of beauty! 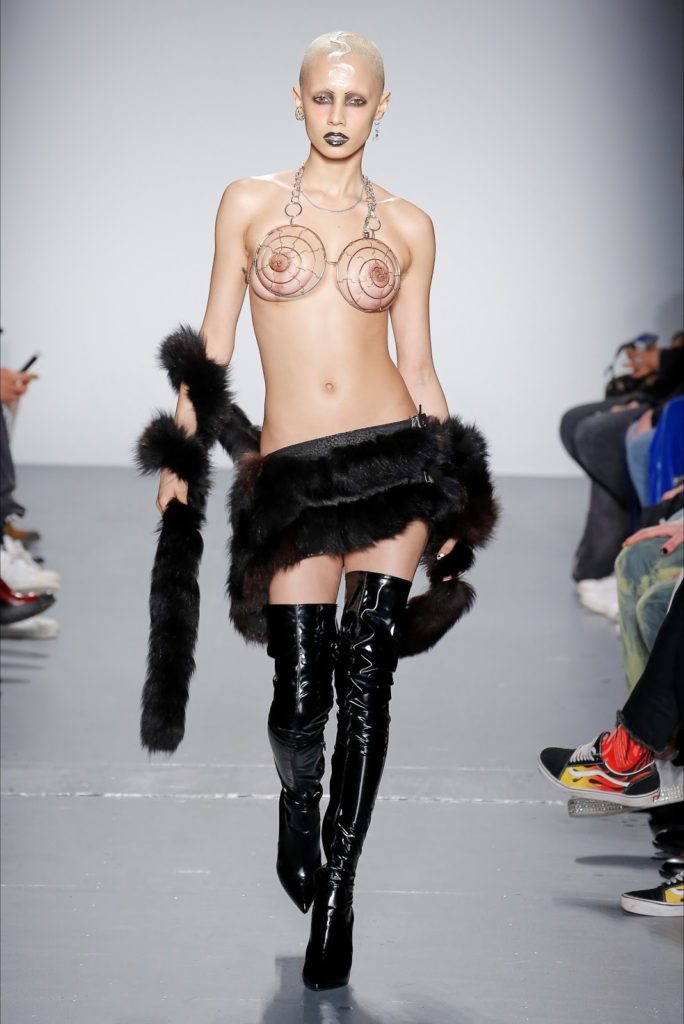 Religion and doubt, sacred and profane for the strong and beautiful bride with a giant rosary seen on the catwalk of Vaquera, underground-born brand designed by a collective of creatives (David Moses, Patrick DiCaprio, Claire Sully and Bryn Taubensee). Unholy children! 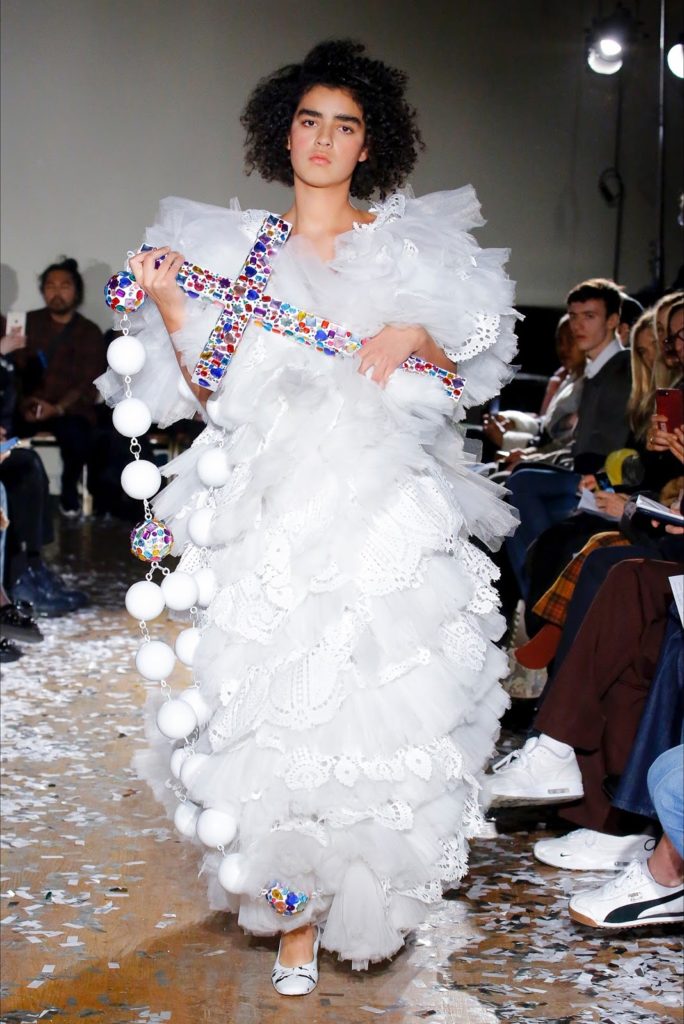 Jeremy Scott is always surprising and ironically funny. Also when he’s inspired by the sci-fi heroines like Milla Jovovich in “The Fifth Element” wearing a kaleidoscopic pop-imaginary in perfect 80s-90s style, from the soft and sweet Popples to the Moonboot, oversized and hyper-enlongated as exaggerated cuissard boots. Smart pop! 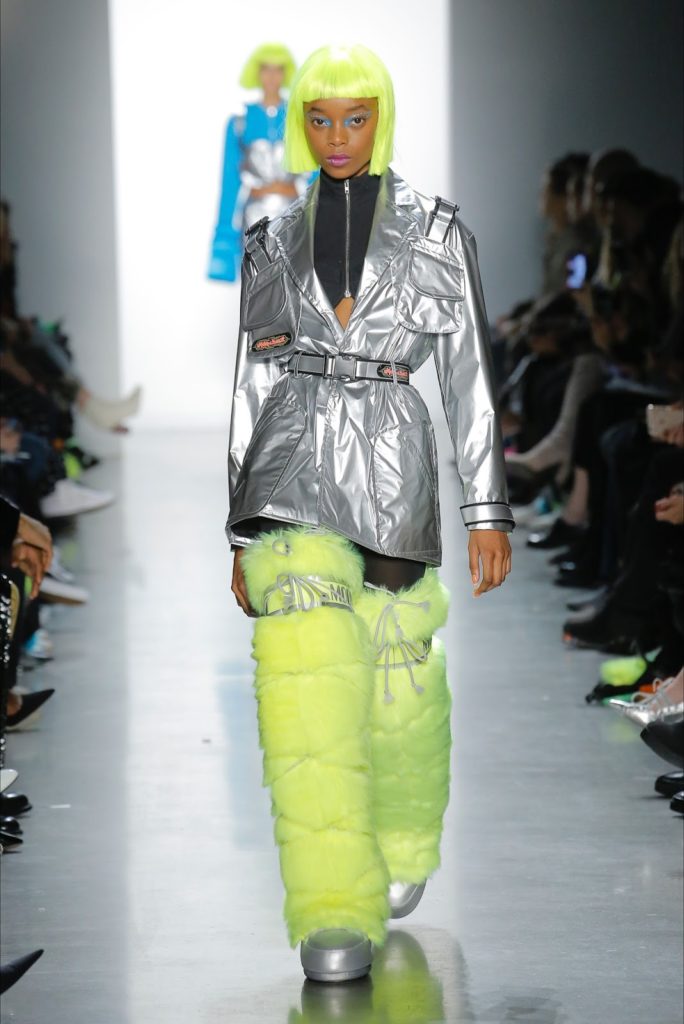 Is it  possible to maximise the lesson of fashion history? Yes, Marc Jacobs did it, giving us another lesson about what is couture on runway with a magnificent, heartbreaking tribute to one of the great masters of fashion design, Yves Saint Laurent. Exaggerating proportions, color-matches and sense of luxury. Audaciously referential! 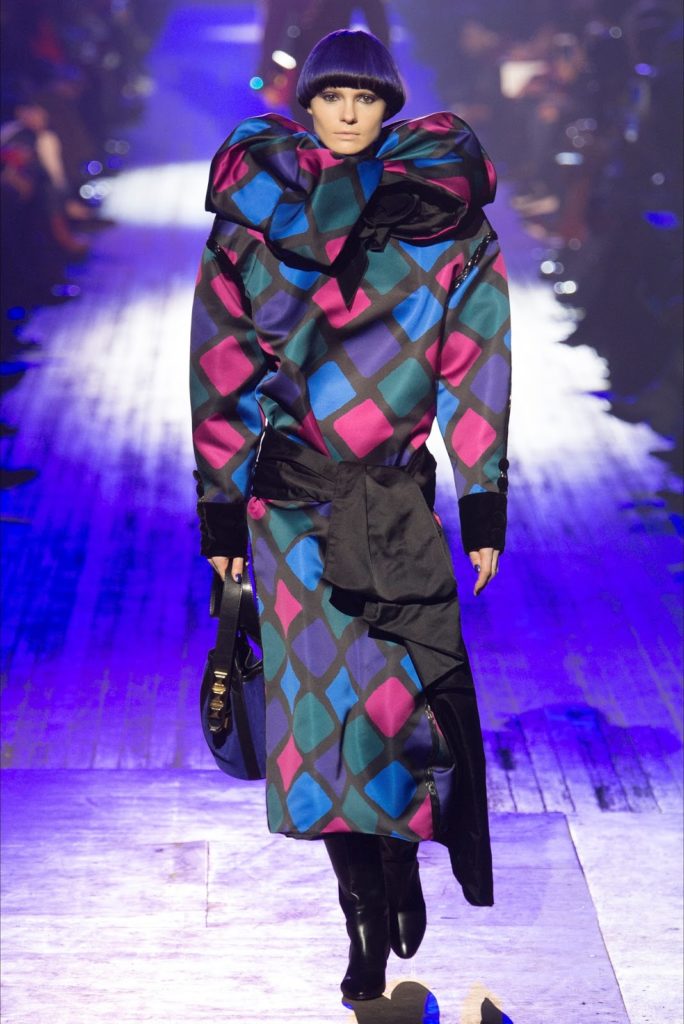 A cynical point of view on the thousand and one faces of America, with its contraddictions, symbols and stereotypes for Calvin Klein by Raf Simons, from Hamish culture to the proud firefighters and lumberjacks, from the radical-chic New York to the snow-covered lands of Montana (transformed for the occasion into popcorn-covered landscapes) or the desolated and empty provincial small-towns, from cinema and cartoon to the conquest of the space. Nicely bad! 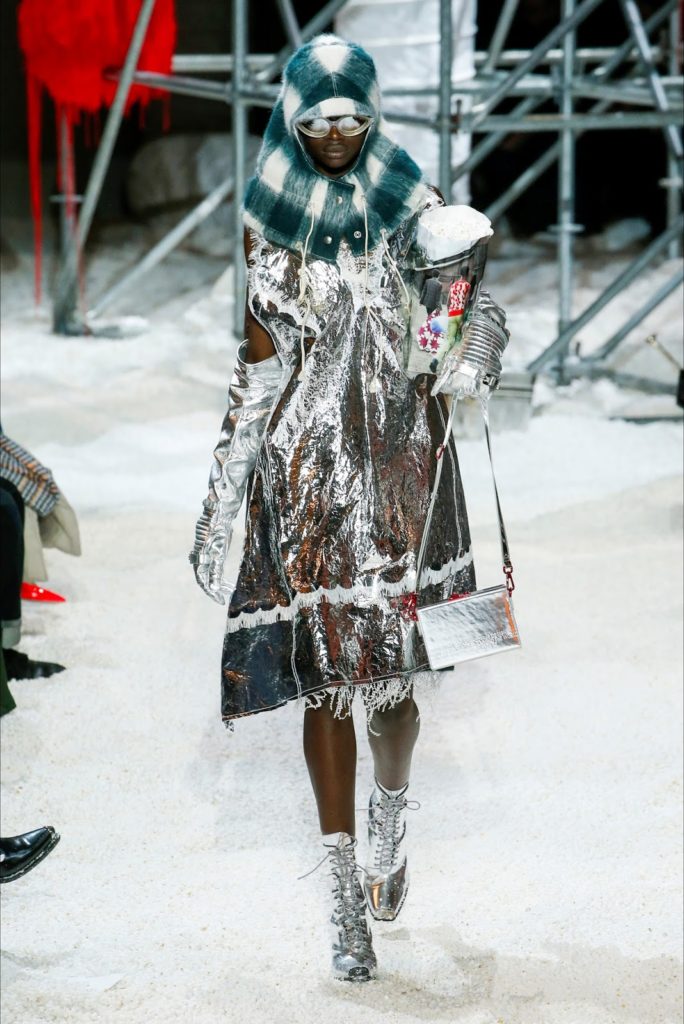 Is a poetic and colored universe that of Lou Dallas, the brand launched in 2013 by Raffaella Hanley. Clothes has the delicacy of children’s innocence and their own disconnected fantasy with references to fashion history unpicked and re-stitched into a different aesthetic world. Poetically anachronistic! 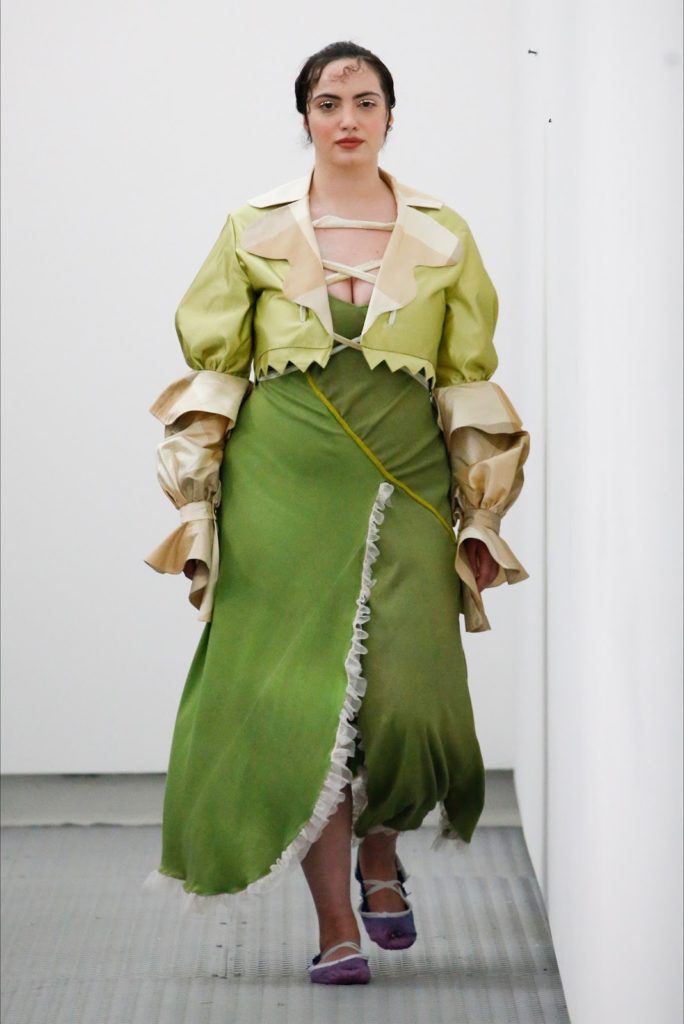 The hyper-technological version of street-style and sportswear. Philipp Plein presented his collection in a sci-fi set, with robots and starship from which arrived exuberant buxom beauties clad in head-to-toe tight-fitting jumpsuits, oversized ski suits, sparkling layers of Swarovski rhinestones and metallic foils. Galactic-kitch! 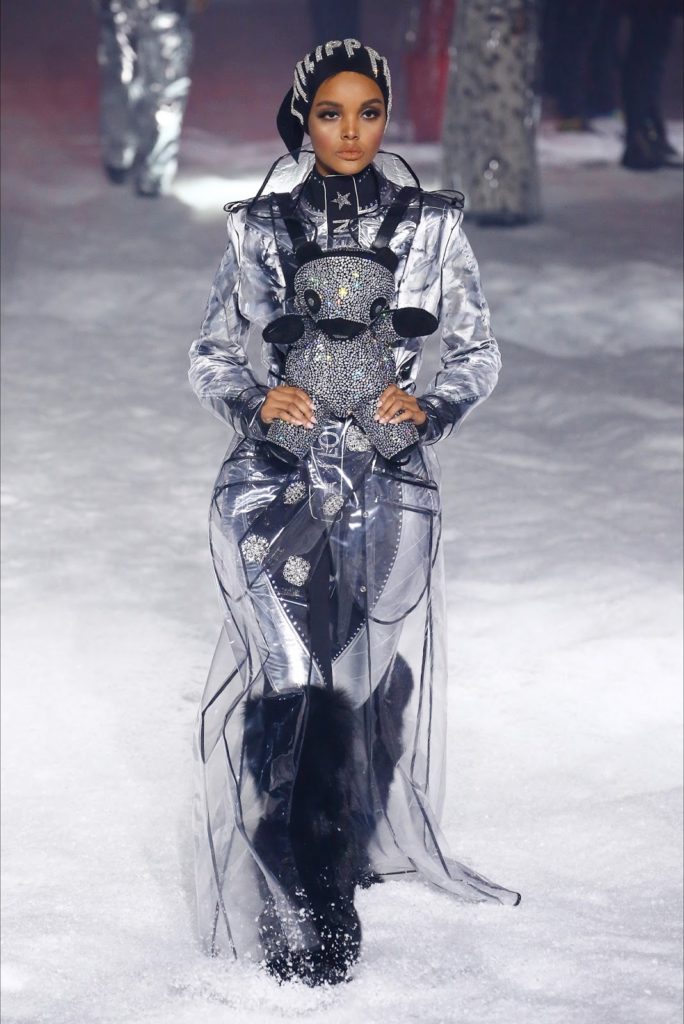 The bored upper-class residents of New York presented by Gauntlett Cheng walk their puppies in very casual outfits. Almost forgetting of being out in public, in the rush to satisfy their small fluffy friends they sluggishly worn the first thing that comes along, like a pajama or a cool version of a jogging suit. Eulogy of trashiness! 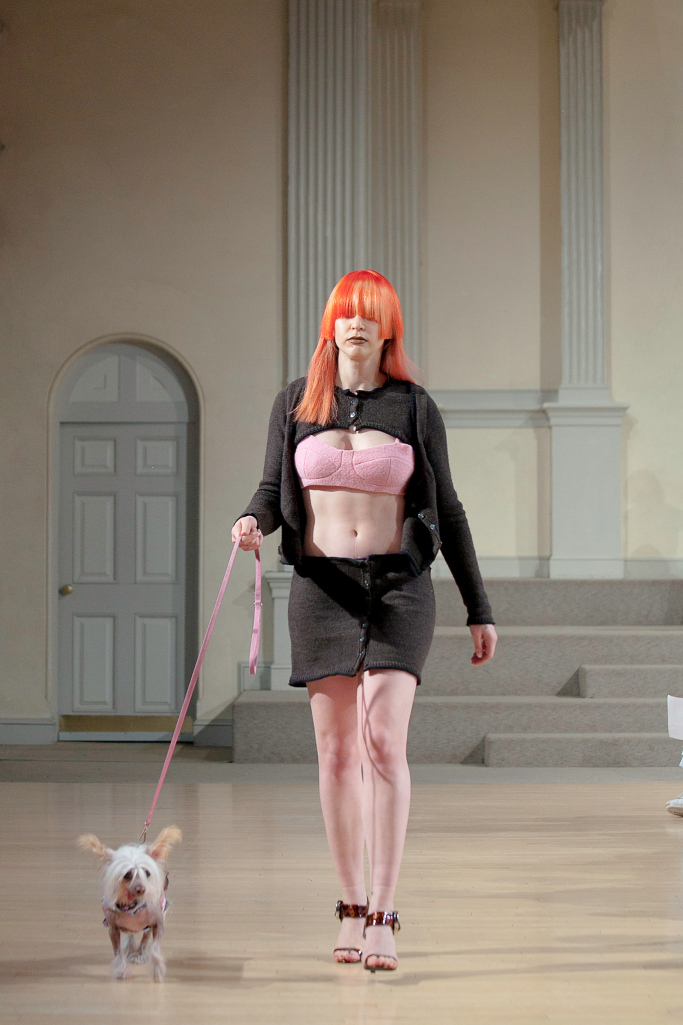 Halfway between Cruella de Vil, the female version of Bram Stoker’s Dracula and the powerful Valkyria of Thierry Mugler in the 90s, the woman figured by The Blonds majestically walks on high platforms, very self-confident and dangerously seductive in her ultra-adherent sparkling jumpsuit. Power to transgression! 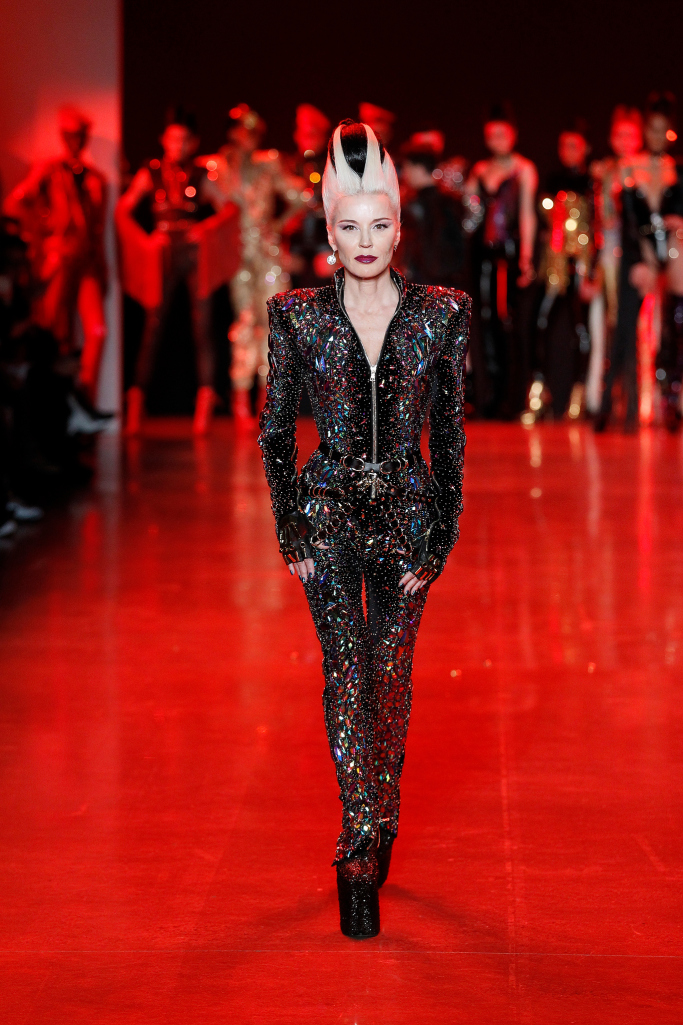 Underground and provocative as usual, V-files dust-off the imaginary of the last 90s and early 2000s. A cultural meltin’pot, a disillusioned and desecrating youth which mixes stories and icons trying to re-build a tribal identity at the rhythm of a rave party. A wink to a kitch revival and one to the contemporary social fluidity! 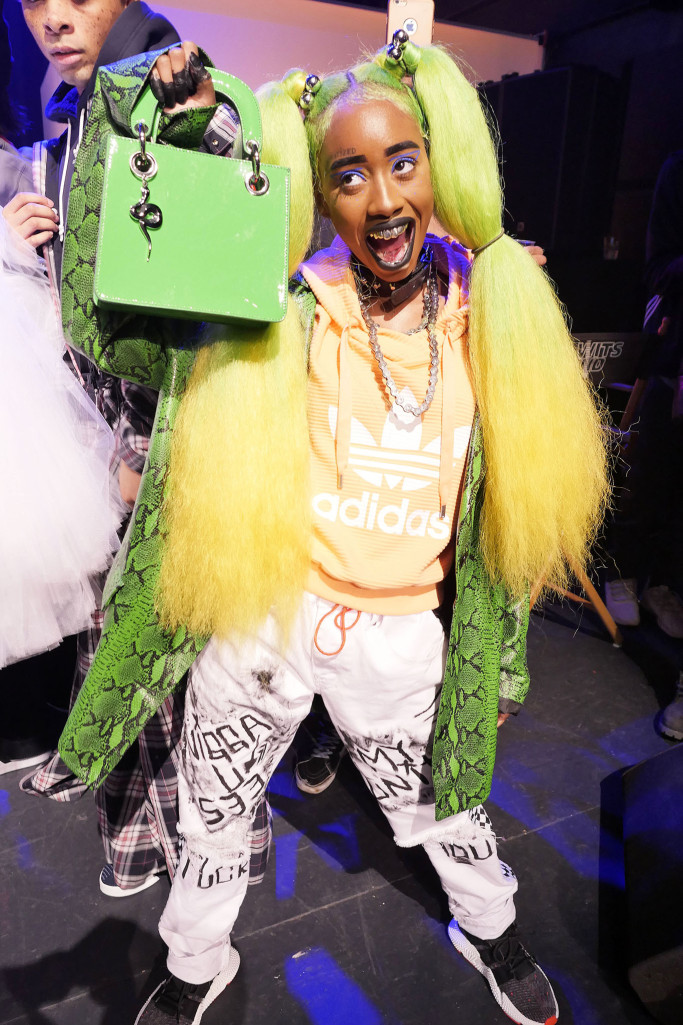