Easter is coming and like every year is the moment to celebrate this festivity with a jubilation of good feelings connected to the rebirth of spring season. Do you want to know why fashion
designers loves so much Easter?
Fashion is always in search of events amd moments to celebrate its own visual narration. Following the continue passage of months and holidays, fashion suggests to people what to wear for Valentine’s Day of for Christmas. That is also true for Easter. In these days we can see many magazines and blogs suggesting the perfect look for Easter holiday with spring 2018 outfits full of flowers and gingham checks.
This is not the same kind of article, because today I want to speak about all the meanings and symbols that testify the love between Easter and fashion.
Technically Easter’s day is celebrated in the first sunday calculating the new full moon after the spring equinox, so its rituals are closely connected with all the elements which characterized this particular moment of the year in terms of rebirth and fertility.
That’s why fashion, considered as the most recognizable expression of human willing to change, loves so much Easter. This is the story of a special affinity through its symbols and visual references found in the strangest and innovative creations of designers and emerging talents.
SPRING
Spring means the beginning of something new. It’s metamorphosis and change from something’s sleeping (the cold and dark winter) to the Renaissance of Earth and Life. The sun become stronger and warm, flowers appear from the frozen ground coloring the world and people feel this regeneration with a desire of freedom and lightness. How newest fashion reply to this needs?
I’ve found the creations of  RUKTAM on Instagram (here his profile). He’s a young fashion designer coming from Thailand and graduated before at RMIT University in Melbourne and then with a Master Degree at IFA Paris. Often inspired by abstract art, these outfits are part of the collection “Distorted Faith” in which he deconstructs the classic shapes of female clothing with the willing of dismantle the stereotypes of society and policy just like Nature breaks the structures of our architecture to renew itself.
The photographer TEJAL PATNI, graduated at Sir J.J. School of Applied Arts in Mumbai, India, and then moved to England to graduate at the London Film Academy, is already well-known by public for his particular and vision between dream and surreality. This picture from his “Splash Calendar” realized in 2014, in which model is immersed into all-over pattern sets recalling the clothing’s floral prints, is a kind of modern Spring Goddess, halfway between Botticelli and the Hindu Lakshmi.
MOON

Easter always comes after the full moon. Because our satellite is connected to the cycle of life, the course of the seasons and of human life. Birth, death and rebirth. The symbolism of the moon is complicated. It represents our hidden identity, the mistery and the sensuality. That’s why it’s surely feminine, associated to goddesses like Artemis, Selene or Virgin Mary. A woman with a multifaceted character, passive and strong, bright and dark at the same time. Perfect representation of the reality’s dualism.
Space age was one of the most important trend for fall 2018 collections and lunar colors, in particular ultra-metallic silver, were the protagonists of the lastest fashion shows. MM6 MAISON MARGIELA cover the entire set for the presentation of its collection, in which futuristic clothes were all in grey and silver tones,  while the design duo MARQUES ALMEIDA declines the rounded moon shapes and the silver color into a street-style oversized bomber jacket.

Going backwards in time, how to forget the moon dress of the DIOR Haute Cuture fall 2011 collection by Bill Gayten, the first show of the maison without John Galliano? The collection, inspired by the Masters of XX° Century Art, for many respects wasn’t so memorable, but the iridescent white ball-gown dress and especially the magnificent headpiece by Stephen Jones will go down forever in fashion history.
Like the moon-shape organza dress designed for the Haute Couture collection ARMANI PRIVE’ spring 2010, which clearly expresses the diaphanous aspect of the lunar woman, so ethereal and cold to appear very far from our Earth.

A girl on the moon was that of the CHANEL fall 2017 ready-to-wear collection, with also the exaggerated space rocket in the middle of the show set, which presented prints inspired by lunar explorators. Or for the Japanese designer YUIMA NAKAZATO, who proposed futuristic girls wearing space-suits in the Haute Couture spring 2018 collection. While Sarah Burton for ALEXANDER MCQUEEN fall 2016 transformed the moon shape, in all its phases, into sparkling embroideries on transparent black tulle.
The visual connection betwwen the moon and Virgin Mary was perfectly found by the experimental designer JEF MONTES, graduated in 2012 at the ArtEZ Institute of the Arts in Arnhem, in his debut collection “Illuminosa”. He created structured and iridescent white, silver and blue fabrics to represent abstract shapes and effects of brightness, playing with the aureole-moon and the religious symbolism.

Other masterful example of experimentation about textures and special effects was given by IRIS VAN HERPEN in collaboration with Jolan Van Der Wiel for the fall 2013, with a moon dress covered by a technological mixture of plastic and iron whose hard and raw aspect was given thanks to the use of magnets.
EGG
Ancestral symbol of life since the ages of Ancient Egyptian, Sumerian and Persian, the egg represents the life, the myth of the creation of the entire Universe. A sort of protective shape which allows the birth of something pure and uncontaminated. The chicks, so pure and tender, coming from the egg was soon associated to the resurrection of Jesus and of Nature in sprintime, that’s the reason because a colored egg gifted during the Easter was symbol of good luck and fertility since the most far ages.

How fashion is inspired by the egg? Not too seriously, to be honest. Except for some fashion editorial which celebrate the egg through the mistery connected with its ancestral symbols mixed with a pinch of irony, like for the incredible photos by TIM WALKER or CLIVE ARROWSMITH.
For the Easter of 2013 VOGUE asked to famous fashion designers to dress up eggs following their personal taste. The result was really funny, like something similar  made in 2015 by the artist CARLY KUHN who represented the most iconic fashion designers on egg surfaces.
And what about the designers? The most serious was THOM BROWNE for his fall 2011 collection, who create a prefectly geometric and rigid egg-shape dress with mantle.
The most desecrated visions were those of AGATHA RUIZ DE LA PRADA in her fall 2009 collection and of the designer TANJU BABACAN, who presented in Turkey his egg-inspired collection in 2013. Both decided to ironically broke the egg revealing the dropping liquid inner and playing with its squashed shape, while already in the far 1953 someone had fun of Easter symbols with funny and irreverent hats.

RABBIT
This is the most controversial and interesting symbol of Easter. The rabbit, as the moon, has two faces and two opposite characters. On one side it’s the most tender animal of the forest and brings luck, on the other side his fearfulness gives the idea of something negative.
Native Americans considered rabbits very smart and put their furs as decoration on arches and arrows to make more fast these weapons. For Egyptian this animal is a great conoisseur of life’s secrets (follow the white rabbit to know the hidden wonderland), while Maya people said that the Moon Goddess was saved by a rabbit.
Other interesting aspect to consider id its great and fast reproductive abitility. That’s the main reason to associate this animal to the renaissance of spring and for translation to Easter. And also to high-level sensuality, in fact it was the sacred animal for Aphrodite. Do you remember the Playboy Bunnies?
For fashion world the bunny is something ambiguous that represents pleasure and voluptuousness, innocence and depravation. How do designers are inspired by rabbits?
The most fascinating part of the rabbit is the head, with its long furry ears. For example, on instagram I found MASKADELIC, a brand founded by two friends who, after experiences as interior designers, decided to try something different producing funny and sensual masks in transparent plastic or UV reactive materials. Their rabbit hasn’t the tender aspect of the Easter bunnies, but it’s incredibly interesting.
The danish designer KIM TRAEGER, graduated from Central Saint Martins, in 2011 presented a collection that was the story of the Easter Bunny interpreted with a macabre twist, a car accident that involves the rabbit almost killing him.

Of course the most close connection between rabbits and fashion finds its inspiration in the representation of “Alice in Wonderland”. In 2016 the designer BRAMANTA WIJANA presented at the Jakarta Fashion Week a bridal collection entirely based on this novel, with bunny headpieces covered in white lace.
The famous white bunny is interpreted with irony by the illustration of CISTERNAS and I leave you with the images of Matrix, whishing you HAPPY EASTER! 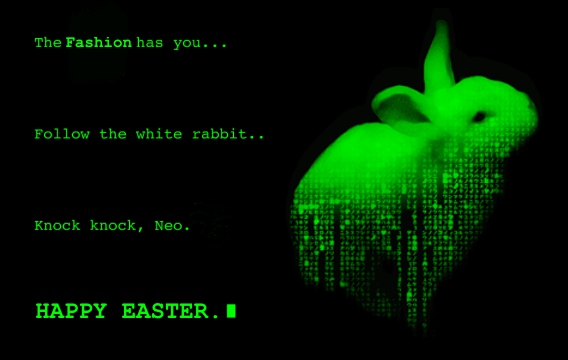