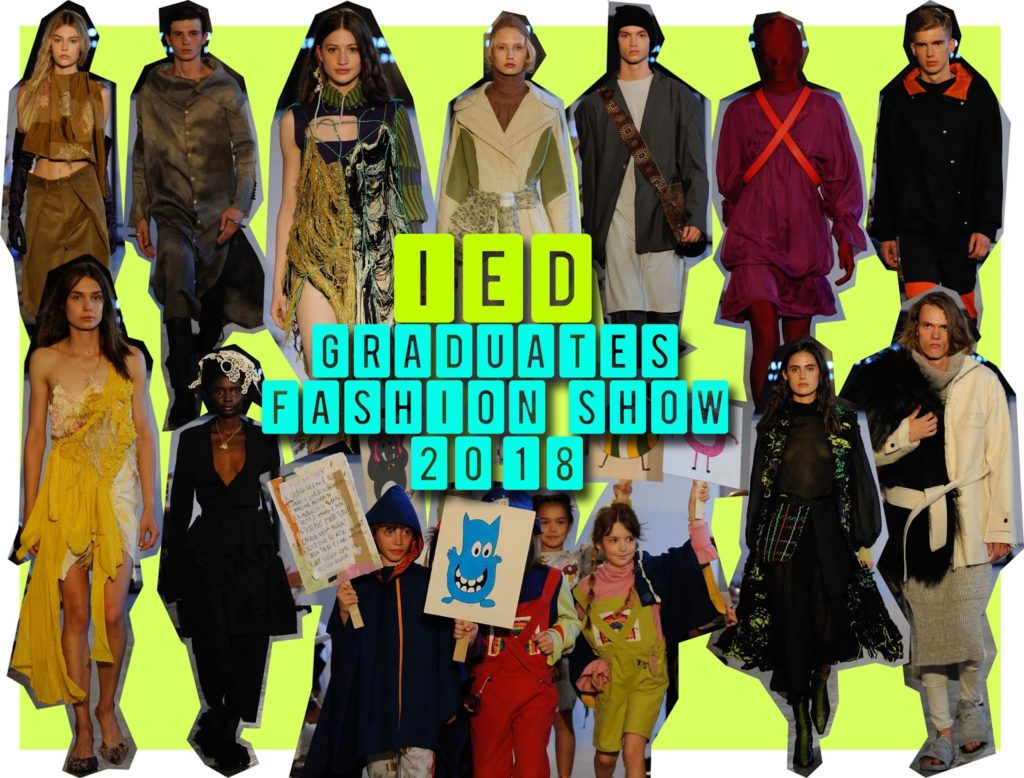 Asynchronicity and simmetry, mutation and destabilisation. The visionary students of IED Moda Milano showcased their graduate collections at Scuola Militare Teulié in Milan.
It was a very warm evening in the hall of Scuola Militare Teulié last Monday, where IED-Istituto Europeo di Design presented the works of its students in a multi-disciplinary show entitled “A/Simmetry of Reflection”, which mixes the best thesis projects of the courses of Fashion Design, Jewelry Design (with the creations by Beatrice Marini and Matteo Riboni), Fashion Styling, Fashion Marketing & Communication.

While all the guests were looking for a bit of refreshment with white fans, the models in couple appeared walking quickly in their winter outfits, designed by 12 designers with the soft luxurious fabrics by Luxury Jersey, main sponsor and partner of the school.

The winner of this prize was Giovanni Costa, with his feminine draped silhouettes, who won a money prize, a provision of jersey fabrics and the opportunity to collaborate with the company, while a special mention for technology innovation was given to Francesco Salvi (who was also finalist of Milano Moda Graduate and selected by the mentoring program of Camera Nazionale della Moda Italiana).

After this moment were showcased the 12 thesis collections of the Fashion Design students, supported by the visual work of the Fashion Styling students. Images, sounds and clothes played together to tell a post-modern narration in which fashion becomes a reflection about the body and its relationship with nature and human environment becomes.

Gabriele Fazi in his “Found in translation” made a reasoning about the the singularity and solitude of man’s life in the contemporary city, in which he can only have accidental chances to keep in contact with each other wearing clothes that become like repetitive uniforms.

“Overgrow” is the capsule collection by Matteo Crepaldi, who won a “Special Mention Franca Sozzani” assigned by Sara Sozzani Maino (Vogue Talents).  Hyper-draped fabrics that imitate the natural effects of passing time on sculpted stones, become vibrant and flourishing surfaces that blend the edges of clothes and the boundaries of the body.
Giulia Totola with her “Amygdala” collection gives shape to her thoughts, visually interpreted through colors and intricate surfaces on minimal silhouettes. Contorted yet simple, the game of white, black and shades of red results really sophisticated, but also disturbing.


Yuqing Han in “Break free” digs up the past of Chinese history reliving the story of the revolutionaries of 1911 who wanted to transform the society giving life to a new form of civilty. Without forgetting the traditional costume of imperial period, the shapes are mixed with the soldier uniforms and the colors of an uncertain future.

The grotesque masks of a 18th-century mansion in Sicily, expressed with complicated ornaments confused on black surfaces, seen through the eyes of the visitors produce “Palagoniìa”, an unquiet vision by Virginia Abate in which the sense of astonishment is contrasted by the perception of the human life caducity.

“Trasfigurando infin la meraviglia” is the poetic title of the collection by Cecilia Juarez Balta, finalist at Milano Moda Graduate, selected by Camera Nazionale della Moda Italiana as new talent for a program of mentoring and also winner of the “Vogue Talent Prize” given by Sara Sozzani Maino. Her collection is real poetry, words turned into hanging threads and messy chromaticism, courageous and incredibly stunning.

“The journey” by Sonia Abdul Khalil deserved the “Special Mention Sara Sozzani” given by Sara Sozzani Maino. The collection describes an encounter of different worlds and cultures, Russian and Afghan, interpreted by a young wanderer man wearing oversize garments taken almost randomly from a flea market.

Laura Recaldini, with her “Memoria su tela”, rediscovers the tradition of ancient crafts of the Val Camonica mountains, mixing the simple authenticity of handcrafted interwoven fabrics with more technical sporty textiles. A mood able to peacefully coniugate the fast pace of modern rhythms with a relaxed past.

Subtly vibrant, the neon colors of the collection “Dis-order” by Elena Magagna reconstruct the pattern of traditional fabrics with a new visual sense which mixes order and chaos, with the black backgrounds that confuses the textile structures and some touches of white like bursts of light in the obscurity.

“Jezabel” by Giovanni Costa is a kind of portrait of a bored gentlewoman, cloaked in her fur mantels, gently imprisoned among ancient tapestries, precious damasks and soft velvets. Sophisticated and modernly elegant, the woman observes the passage of time, while the present seems to stand still.

“Polheim” by Björn Jónsson tells about all the solitude of a early 19th-century explorer, almost missed in the heartbreaking and evanescent glaced landscapes of Antarctica. In the absolute silence of this surrounding space, the man walk alone wearing giant furs and warm clothes, heavy protective armours againt the iced environment.

Round of applause for the funny little boys and girls presented in the catwalk by Amanda Franzoni with her childrenwear collection “Bizzarriestraordinariamenteordinarie”, who won the “Pitti Tutorship Reward” having the opportunity to have three meetings with Riccardo Vannetti (Tutorship Director). Like little revolutionaries, the children walked remembering us the power of creativity and freedom far away from the strict rules of adult world.