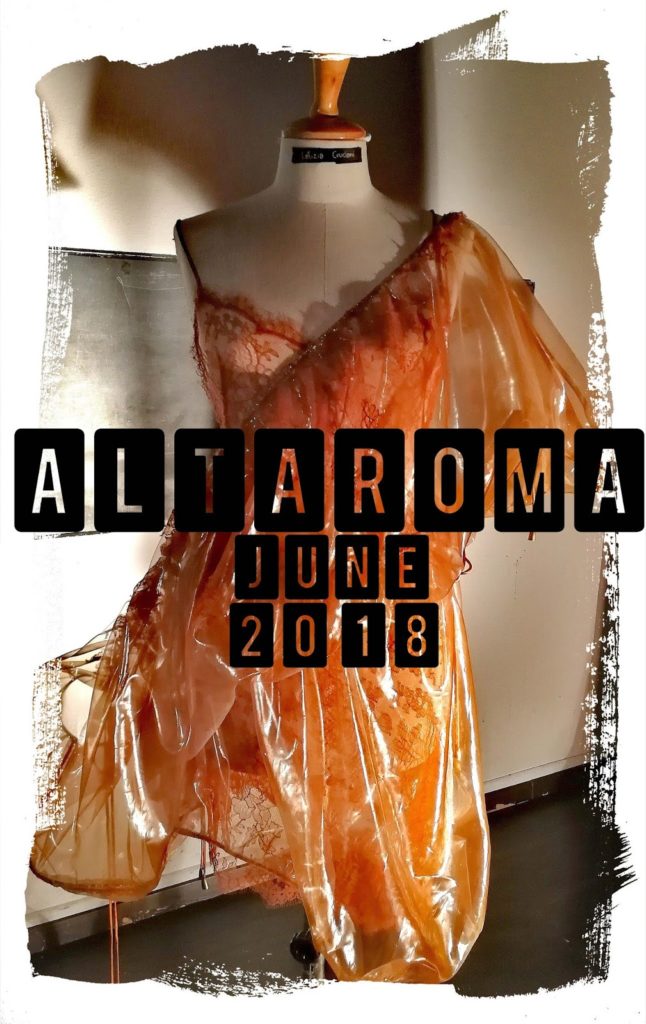 Five days dedicated to Haute Couture are just finished in the stunning location of Cinecittà Studios, in Rome. I was there to discover new names and genuine talents who are working to give a future to Italian and international Haute Couture.

Those were very intense five days in the warm climate of Rome, with only a moment of heavy rainfall unfortunately just during the fashion show of Renato Balestra, one of the great masters of Italian style.
For the rest of the time, under the blazing sun it was a coming and going of models, designers, press representatives, buyers and staff people. A very modern chaos contrasting with the placid atmosphere of a fake ancient Rome, the wonderful set offered by Cinecittà Studios to AltaRoma. The city hosted also a lot of events in town, contribuiting to the prestige of the fashion week with its architectural beauties.
This is the report of those days.
#DAY1
More that first day it should be more correct speaking of first evening. In fact I arrived in Rome just for the aperitif, returning once again to my dear ACCADEMIA DI COSTUME E MODA, transformed for the occasion in a great location for the exhibition of the students works.
The “Academia Factory 2018” party with dj-set started at 6:30 pm along the banks of the Tiber river and, among the hundreds of guests, I finally had the occasion to take a closer look to the “Final Work” crationsof the last graduates: the stunning and wonderfully excessive fur by Giacomo Pavia, the fluffy lightness of the printed silks of Giulia Saba, the red coat with 3-D garlands by Alessandra Caponera that I so loved during the fashion show in January, the sophisticated kimono coats by Alessia Conetta and the Japanese references of Tommaso Ambrosca, the colorfull anbd really contemporary outfit by Oriana Pastore.
Finally on the scale the complete collection by Mauro Muzio Medaglia, winner of the academy’s contest last January, who also if so young was a real master on costructing these sculptoral geometries without resulting heavy, instead infusing to the rigid proportions the lightness of layers, the game of origami pleats and the delicacy of the trasparencies.
Upstairs the classrooms were turned into exhibition rooms, showcasing all the works of the 3-years degree and master courses. On the walls of the right side of the floor, the new textile experimental projects became like thematic artworks, to the roof were hung real animal leathers and sof big bags, while in a room the black & white hardcase bags were displayed between the sketches.
In another dark room the black marvellous prototypes of the Haute Couture master course, made under the brief and supervision of Pier Paolo Piccioli of Maison Valentino, standing on the tables between the original sketchbooks of the students.
There was space also for the Fashion Communication students: a projector showed the video inspired by the 80s, while on the walls were all the projects of the styling course and the great works made for the academy’s magazine.
A recall to the past was on the left side of the school, the part dedicated to Costume Design with projects of costumes for the novel and theatre pieces of Pirandello, Jane Austen and the Puccini’s “Tosca”, real masterpieces often made using poor materials but a great quantity of fantasy.
Last part of the exhibition, maybe less glamour, but so full of memories for me, was in the library,, in which were exposed the pictures and the articles written by the academy’s founder Rosana Pistolese and some rare fashion magazine, like the original first number of Harper’s Bazaar.
AltaRoma fashion shows began with the simple femininity of SABRINA PERSECHINO, who showcased her creation at 9 pm at Palazzo delle Esposizioni in Via Nazionale. The f/w 2018-19 prêt-à-couture collection “Optical” showed all the multifaceted cultural background of its creator.
See Also
Emerging Designers

Sabrina was before an architect and then a fashion designer and this love for the shapes and structured volumes of “cutting architecture” trend still remains in her minimal style, infusing with a subtle aesthetic the geometric patterns of Optical Art that is the main inspiration of the collection.
Full and empty spaces are interpreted through laser-cut techniques to create modern laces, soft cachemire and silks. Beautiful the color palette, with black and white absolute protagonists and the rich proposal of burnt curcuma oranges, coral red, turtledove and crocodile green.