ALTAROMA: THE RISE OF (IM)PERFECTION – DAY 2

ALTAROMA: THE RISE OF (IM)PERFECTION – DAY 1

Francesca Cottone: the new wave of Made in Italy genderless tailoring

The future of Haute Couture: report from Altaroma June 2018 (part 5)

June and July are the months of Haute Couture, with Rome and Paris alternating their beautiful scenaries as background to showcase the talent of a even younger generation of designers. I was at Altaroma in search of new talents to follow the evolution of Italian Haute Couture.


Also if I lived in Rome for 4 years when I was a fashion design student and I should know how much hot can be this city during summer, I was not more used to the warm days under the sun. Anyway, trust me on, it was worth it.  Altaroma is always a fascinating fashion week, especially now that it’s betting on young designers to refresh Italian Haute Couture with new blood and unbridled creativity.

Altaroma days, as I said in my previous post (here), were very intense with a miriads of events, fashion shows and exhibitions. This is the report of those moments. 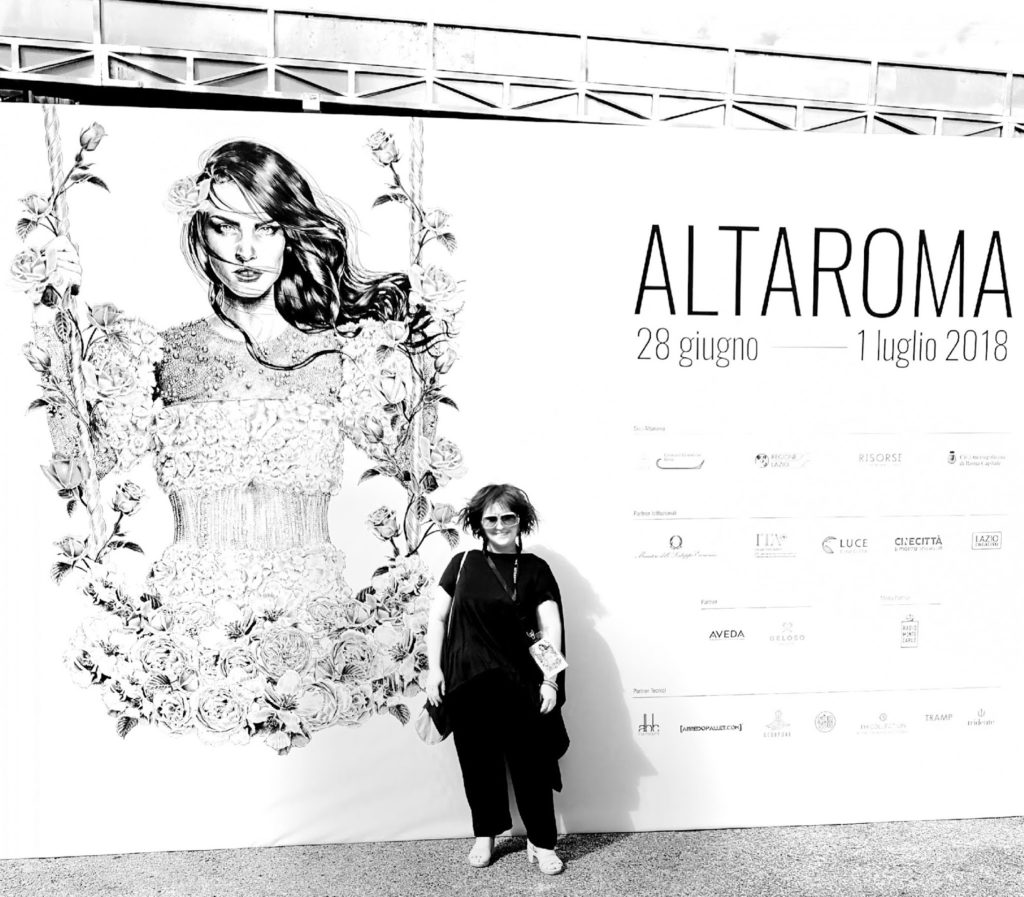 
The third and last appointment with the designers of SHOWCASE started at 4 o’clock. Finally I had the great pleasure to personally know Tiziano Guardini, a designer I always admired for his brave sustainable way to approach fashion design. Able to affirm a strong aesthetic concept that goes beyond the way people commonly perceived sustainable fashion (too often appreciated only for its good intensions but not for its beauty), Tiziano gives a creative contribute to his products turning them with a touch of glamour into something that before is beautiful and only in a second moment shows its good side.
“Colorful mountains”, the prêt-à-couture collection presented at Showcase, is inspired by the Peruvian Rainbow Mountains, transformed into shades of colors and moved by braids and sinuous lines, brought in a urban context with oversize proportions more portable than his previous stunning sculptural dresses. Great work also with materials: organic or regenerated denim thanks to Isko, cruelty-free silks, nylon fabrics and buttons from recycled plastic bottles ans fishnets abandoned in the oceans, thermal bonding to not waste fabrics.

One can fall in love for a jacket? Yes, if the author is Antonio Martino, a Salerno-born-Roman-adopted designer with a long experience as patternmaker and fashion designer, who dressed in the years many Italian celebrities with his Couture line and now is launching at Showcase his ready-to-wear called “Urban Park”. Just influenced by street style, this second collection is inspired by abandoned architectural structures of the area of Trastevere in Rome, which are slowly transforming into damaged structures by the return of nature and by the action of rain and wind.
The idea of something immense and wild in contrast with things created by the man’s hand are interpreted using big volumes hung-up by cotton stripes and buckles. As compared with his couture line, Antonio used the same attention for details and tailoring perfection, making this collection easier and smarter by the use of materials, like for the white and bleached denim, the semitransparent nylon and the checked silks that can be shaped on the body with buckles and are perfect for almost every silhouette.
I first met Jure Stropnik, designer of Iuri, during last edition of White Show in early June. Finally I had the occasion to see for real his accessories collection entitled “Geo”, inspired by the simple geometric figures like squares, triangle and circles, but also from geography, interpreting the essence of each continent at Olympic Games through pure colors and shapes. Bags beautiful because simple and conceptual.
With his gentle touch and clear vision Sylvio Giardina manages to transform the classic shapes of jewelry into extraordinary pieces of design. After the gorgeous Haute Couture fashion show (here the report), Sylvio presented at Showcase his collection of jewels for ss 2019 entitled “Ghost”, in which cabochon precious and semiprecious stones play with the lightness of transparent plexiglass to emphasize the characteristic dualism of the designer, always modern and sophisticated at the same time.
In the jewels of Giusy Liguori, creative mind behind the label 6229, what is most striking is the incredible attention given to details which become the protagonists of the jewels, brightening the almost minimal shapes with flashes of creativity. That exceeded the boundaries of a sough-after simplicity to find the extra-ordinary, like in the new collection “Universe”, inspired by orbits and planet, tunders and stars, dedicated to all kind of women in our Galaxy and over.
See Also
Emerging Designers

After Showcase it was the turn of MARIANNA CIMINI‘s fashion show. The designer, who studied at istituto Marangoni in Milan and was a finalist of “Who Is On Next?” 2014, presented her colorful collection inspired by the Induist ceremony of “Holi”, in which the white garments are covered by colored powders taken from flowers to represent the rebirth of springtime. Effectively Marianna’s collection is a refreshing dive into a glamour mood halfway between hippie and 90s styles, an invite to enjoy life.

For me the most awaited event of the day was “Who Is On Next?” 2018, the competition that showcases the talent of a new generation of Italian designers and is also a platform to raise awareness of new brands to international media and buyers.

I had time to see the creations of the accessory design finalists just before the fashion show in an exhibition staged in the Studio 10 entrance. Among them I’d like to drawn attention on the experimental bags in wood and leather of the label Woobag by the design duo formed by Sara Da Dalt and Sheila Pierobon (already seen in the Altaroma previous edition), the bold and flashy bags by Maissa, a brand launched in 2016 by Giulia Ber Tacchini, who creates sculptural shapes using 3-D printing, and the glamour and modern sunglasses of Delirious Eyewear by Marco Lanero, who won the accessory category with special mention, the “Special Prize by Sugar” and the “Tomorrow Prize”.
For this edition were exceptionally rewarded two winners for womenswear who represents different aspects of the Italian design strenghts. MRZ by Simona Marziali, label founded in 2012, gives new life to traditional knitwear mixing sportswear volumes and details, revisiting male classic pieces and fabrics, using prints inspired by vintage Airlines graphics for a dinamic and eclectic wardrobe. The designer won also the “Penelope Prize”.
MTF by Maria Turri Ferro was awarded instead for the painstaking work on each detail, the utmost attention given to the construction and the simple silhouettes designed with clean intent to underline the importance of small things, for a return to a craftsmanship that requires time and dedication.
Both the winners of womenswear category won the “Prize Franca Sozzani” thanks to the collaboration between Altaroma and Vogue Italia, with a money prize, a mentoring follow-up of their progresses and the chance to showcase their collections during next Milan Fashion Week on September 2019. While the winner of the accessory category will present his creations at “Fashion Hub Market”. Another special prize offered by Coin Excelsior was given to Leo Studio Design by Leo Macina, who presented a very cool and lovely collection inspired by Pop culture, that will be sold in this important department store in Rome.