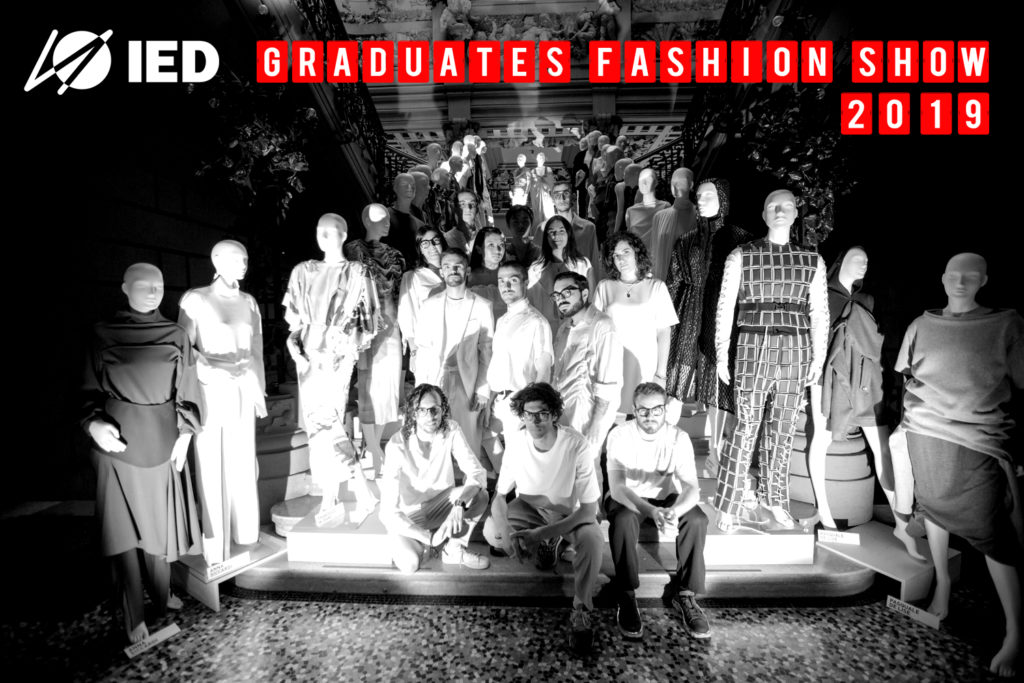 “Euritmia del Sussurro”, the title of the IED Graduates Fashion Show 2019, is an interactive live performance to showcase the 13 best thesis collections entirely handmade by the students of Istituto Europeo di Design.

In a warm evening of June, the guests invited by IED ISTITUTO EUROPEO DI DESIGN last Sunday were received in the dim-light of the trees of Palazzo Castiglioni‘s garden. A quite location in the modernist context of one of the most beautiful and particular buildings of Milan.
There IED presented “Euritmia del Sussurro – Eurythmy of Whisper”, a conceptual performing exhibition in which where showcased the final collections of 13 students of Fashion Design, Shoes & Accessories Design and Jewelry Design courses, and the project “Luxury Jersey”, for which were selected 17 designers.
Istituto Europeo di Design is living a very important period. It was recently included in the ranking of the best fashion schools of the world by Business of Fashion (BoF) and one of its students, Francesco Murano was the winner of Milano Moda Graduate 2019.

But the reward doesn’t end here. During the event of last Sunday, by a jury formed by important experts, were given also other three prices to the young talents of IED:

Besides of the importance of these prices, the IED Fashion Show 2019 impressed me for the very high quality of the thesis projects and I particularly appreciated the choice of an interactive performance instead of a more classic catwalk. An intimate approach in line with the general inspirational theme, not chaotic and fast, but slow, calm and just whispered.
In this way I had the opportunity to take a closer look and interact with the collections, better understanding their concepts, the choice of fabrics and colors, the tailoring details and the creative solutions found by the young talents of this fashion school.
Giuseppe Serra, with “Sa Mama Su Sole”, rethinks the traditional costume of his native land, Sardinia, and actualizes the slow rhythmic movements of women within the domestic walls, the tinkling buttonera in silver, the rustle of fringes, into black and white structured shapes, feminine and serious at the same time.
“Stanno tutti bene” by Giulia Camata, is a framework of bourgeois life, disassembled and distant, in which the frigid appearance of perfection falls apart, revealing its subtle restlessness through torn garments, ripped apart and recomposed, and through puzzle-effect portraits of fragile characters.
The collection “Reclaim” by Domenico Del Gais is the most experimental and innovative. The basic concept starts from the study of square shape, repetitive and moved into the space, plays with volumes and padded surfaces and gives girlish colors to the pseudo-renaissance armours for futuristic fencer men.
“[Uncanny_Futur]” by Theo Peaquin is a dystopian vision of a hyper-technological world made of portable screens and electric fields, in which the softness of the knitwear, usually intimate and softly wrapping, is transformed into a fleeting surfaces, electronic inputs and distorting glitch effects.
“Bonola 1996 Marcello Pipitone MI”, by Marcello Pipitone, is a crazy game of colors that are mixed together, chasing each other and have materic and volumetric consistency, enveloping the body with wide embraces and emphasizing the free movement and the personal identity or the wearers.
Jie-Xin Xia presents the accessories collection “The body shapes the way we play” cancelling as much as possible the perception of matter and abandoning any decorative embellishment in favor of a formal rigour, a geometric approach to shapes and a visual liquidity given by the transparency.
Anna Siccardi, with her collection “Binôme” draws a portrait of a dual woman. Contemporary in the choice of metropolitan colors and almost severe on one side, looking back to the past for underlining the feminine image and the research of couture volumes on the other side.
The collection “D-eiviotion” by Gianluca Zippo is beautiful in the most damned and dramatic sense of term, it’s a bloody transfiguration of liturgical dress, a lively ensemble of drapings and ruches, a simulacrum of devotion bordering on madness.
See Also
Graduate Fashion

“Eterno ritorno 4°54’11″N 8°51’56″E” by Davide Paietta brings us in a place close to the designer’s memory, in a town in the province of Varese. Coordinates of a journey that is primarly soul-searching and emotional, in which the colors of knits transmit the desire of reaching a peaceful balance.
The jewelry designer Francesca Locati presents “Quietivo”, an original and almost mystical meditation around the blue color, intense as the sea, deep as the sky, in which the glass jewels seem alien shapes or microbes floating in the transparence of infinite.
The reflection which Pasquale De Lise makes with his collection “Dovevo e invece sono” is about identity, based on the relationship between body and mind, between what we should or would like to be and who we really are. The body is the protagonist, in the sense of its cancellation, of being shaped by the mind, destructured, moved and diluted, changed at our pleasure.
The woman depicted by Francesco Murano in his collection “Ossimoro Plastico” is almost a goddess, strong, haughty, perfect and sculptural between drapes and folds which reveal shadows and lights. The fabric takes a dramatic turn, creates volumes and dinamism, draws perfect and invincible silhouettes.
The sartorial aspect of the collection “Recovery” by Yinghao Sun is precise and almost surgical. In the clothes are opened unexpected cuts and slits, but everything is clean and linear, reducing the distance between the involucre of the garments and the gender identity of the body.