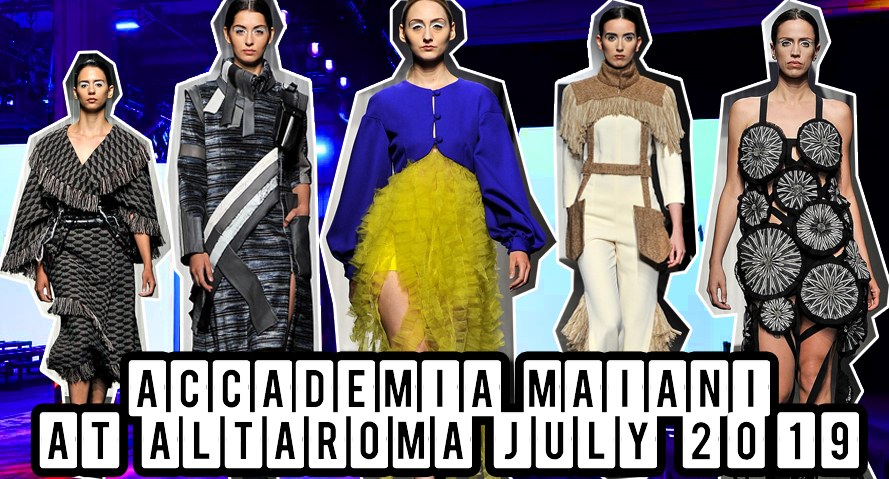 With the collective collection “Legati alla vita – Tied to life” ACCADEMIA DI MODA MAIANI presented at Altaroma the works of 16 students who just finished a 6-months course promoted by Regione Lazio and the European Community.

Only six months to teach the basis of fashion design, patternmaking and tailoring. A group of 16 students, more or less young, were selected to partecipate for free to the short course “Clothing patternmaking” at ACCADEMIA MAIANI thanks to the project “Mestieri” promoted by Regione Lazio and co-financied by European Community.
16 women who had the occasion to requalify their skills through an intense course having the new opportunity, often after having lost their job or just to relaunch their career, to showcase their abilities in an important event like ALTAROMA.
Thanks to the very practical “Maiani’s Method“, a brewed patternmaking technique invented by the school’s founder Maria Maiani, in a very short time these students become able to design and create by themselves two outfits each for partecipating to the graduate fashion show in the first day of Altaroma fashion week.

“The themes of this collection are many, social, ethic, equality and solidarity. Life needs true and sincere relationships, indissoluble connections, work. Today more than ever it’s a fight for surviving, against discrimination and for inclusivity. Life is woma, elegance and maternity, courage and vitality, free from anything can make it defensless” (Maria Maiani, Founder and Director of Accademia di Moda Maiani)

The collective collection “Legati alla vita – Tied to life” brought on catwalk 32 outfits inspired by life, seen through different points of view and interpreted as something that connects everything around us through the use of cords, interwining, laces and threads.
So the ethernal life is represented by the Ginko Biloba tree that decors the white neoprene dresses created by Tiziana Ceraso, or by the delicate and strong relationship between a mother and her son through the umbilical cord in the pregnant dresses by Sara Santelli.
The human DNA, with its helicoidal shape, becomes the ornament of the woven wool outfits by Francesca De Caro, while the embrace is the way in which Silvia Tiberia expresses the need of protection and love. Good vibes also for Serena De Santis, who is inspired by the sunflower shape to represent positive thoughts and the courage to live and work for our dreams.
Nature is the primary source of inspiration for the creations by Marianna Maoddi, who transforms the jellyfish tentacles into colorful floating frills, and for Annunziata Oddi, who uses trees and roses to symbolize life and the delicate relationship with environment.
Andrya Pedroso Gomez finds the essence of nature, simplifying colors and shapes in search of purity, while Elena Presutti, at the opposite, works on interwoven textures inspired by roots and membrane to create her sophisticate outfits.
The relationship between nature and humans, animals and women, is the excuse for creating ethnic inspired colorful fabrics for Ramona Maiorani. The ethnic motifs of Tibetan Mandala for Elisabetta Umbro symbolizes the life cycle and renovation, but also the importance of cultural heritage.
A deep reasoning on the beauty of women is made by Grazia Iannello, who was fascinated by the iconic “Black Venus” Josephine Baker and her different type of grace and elegance. Caterina Masi plays with the role od women in society, creating sensual outfits that mix male and female. While Palmira Paola Perez Battifora brings on catwalk modern and brave urban amazons, ready to fight for what they want.
Against the unjustice of our world are the creations of Angela Tedesco, who transforms the border wall between Usa and Mexico into decorations for beautiful coats and dresses, while Sara Guido faces the theme of migration, with a thought to the refugees who are in search of a better future for themselves and their families.