ALTAROMA: THE RISE OF (IM)PERFECTION – DAY 2

ALTAROMA: THE RISE OF (IM)PERFECTION – DAY 1

Francesca Cottone: the new wave of Made in Italy genderless tailoring 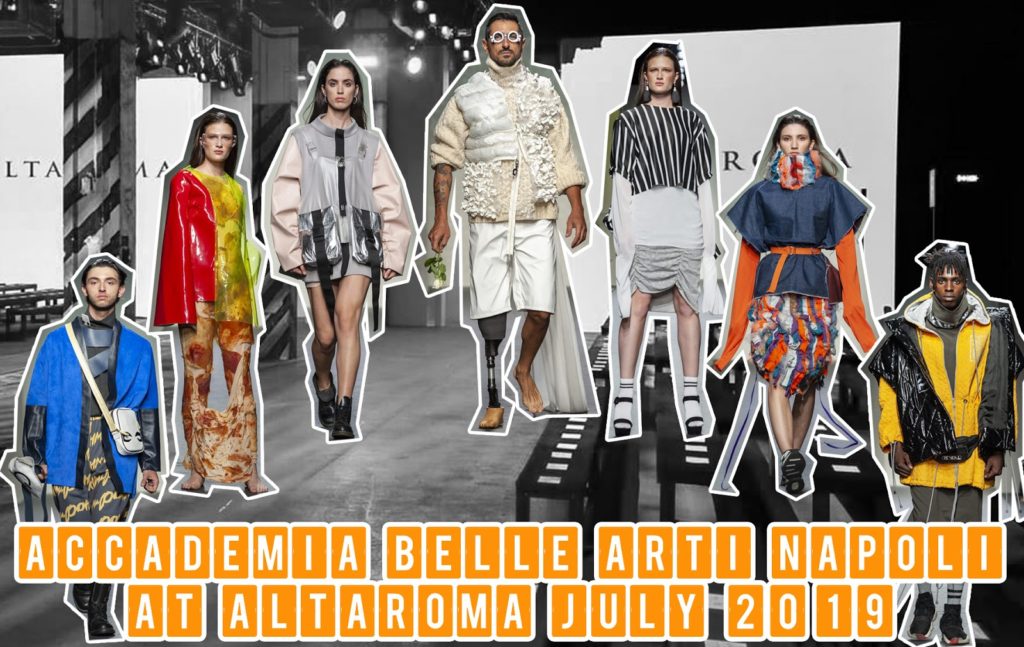 Accademia di Belle Arti di Napoli (Academy of Fine Arts of Naples) last 4th July at Altaroma presented the works of 9 students of the fashion design course. “Body Reloaded” is a futuristic and experimental graduate fashion show around the concept of overcome the borders of body’s structure, thinking about the role of humanity and fashion in the next future.

Going beyond the phisical limits of the body, the 9 young students of ACCADEMIA DI BELLE ARTI DI NAPOLI (Academy of Fine Arts of Naples) want to express their personal vision about the past, the present and especially the future of humanity.
So the graduate fashion show we’ve seen last week on the catwalk of ALTAROMA, one of the most interesting I’ve seen during the Roman fashion week, was a free reasoning about the role of the body, seen as an involucre, sometimes a limit, but also a house for our thoughts and stories.
In this sense, the purpose of fashion is that of giving significance to the male and female body, of interpreting culturally and aesthetically its meanings, becoming the media of its language. Without considering the ephemeral trends, the fashion of the future will be the best way to communicate the essence of the person and to give important social messages of inclusivity and sustainability.
“Body Reloaded” is a very beautiful and intense collective collection, that gives spaces to thoughts and emotions, shaking the conscience of the public in a way too often forgotten by traditional fashion system, leaving us with many questions. Who we are? What we want to become?

Five are the protagonists of “Heroin” brought on catwalk by Francesca Cantone, in a capsule collection inspired by the dystopian graphic novel “Golem” by LRNZ, alias Lorenzo Ceccotti. The young designer tryes to  imagine Italy in the future, in which people will prefer the comfort of casual pieces playing with layers and colors in complete freedom, but anyway hiding their own secrets and personalities, that can be revealed only through understanding their symbolic language.
“Reveal” by Francesco Emiliano is a collection inspired by the life and work of three great artists, Marina Abramovich, Alexander McQueen and Sergei Polunin, who transformed their art in a way of living, of being truly themselves. The oversize proportions of street-style, the genderless shapes and the avant-garde choice of fabrics and volumes are used as media to communicate the desire of freedom.
The dystopian future is depicted in a very cutting-edge and experimental way by “After_evolution”, the graduate collection realized by Barbara Miraglia and Veronica Russo, who imagine the mutation of human body toward a new hybrid species. Through the manipulation of the fabric, the female body is covered by draped or post-apocalyptic damaged surfaces and its various parts are joined together and hybridized with technological vynil and neon pvc elements.
“Zero Gravity”, realized by Luisa Nunziata, rethinks the future looking back to the past. It celebrates the 50th anniversary of the moon landing of Apollo 11 in 1969, taking inspiration from the futuristic shapes and hi-tech materials used for the astronaut’s suit and the spatial missions. So the robust nylon straps become decorations and closures for the big patch-pockets and the belt bags that equip the garments, while the fabrics are all technological, from neoprene to latex, and the color palette is drastically reduced to essentiality.
“Hypocentrum” is the fracture from which an earthquake starts. Alessia Pascarella and Benedetta Santoro use this metaphor and the Surreal concept of automatic writing to introduce inside their outfits small interstices that can give the possibility to modify their aspect at will without the action of conscience. The gaps between the multiple layers of fabrics, declined into shades of orange, violet and petrol blue, break the simplicity of the denim, while in other shades give movement to the pastel tones of trench coats and jackets.
Giuseppe Zanfino, with his “The Theory of Everything” wants to celebrate the life and thoughts of the great astrophysicist Stephen Hawking. The studies about time and space are translated through the apparent simplicity of the silhouettes, the pleats of the fabric, the possibility of changing the shapes using drawstrings that move the surfaces, by the linearity of stripes. Past and future are confused and mixed in a single entity.
Pietro Migliucci, who ended the fashion show, invites us to a reawakening of our slumbering conscience, launching a very important social message of inclusivity. Choosing the soundtrack of the partisan song “Bella Ciao”, the designer celebrates the diversity of human body. Despite the color of our skin, the age, the wellness and the size, we are all made by bones, blood and fat. And the collection “Please feed fat people”, made of soft cocooning layers of fabrics and plastic materials in pure shades of white, is a hymn to the freedom of expression and of being what we really are.