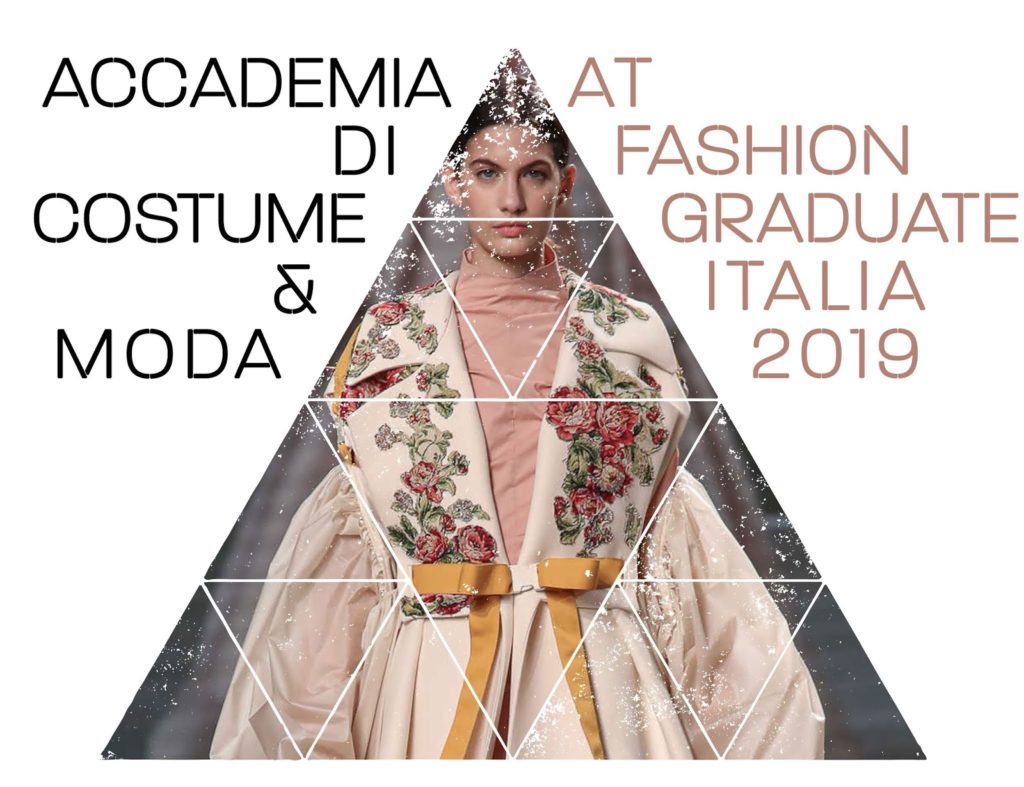 Dreamy atmospheres and conceptual shapes for the 9 young students of the Haute Couture Master by Accademia di Costume & Moda, who presented their final collections during the last edition of Fashion Graduate Italia 2019.

The research of excellence, of the perfection in every single detail, of creativity pushed to the extremes limits, but never forgetting the immense tradition of Italian couture.

This is the purpose of the 9 talents coming from ACCADEMIA DI COSTUME & MODA in Rome, who showcased their final collections at the end of the Master Course of Haute Couture. After one intense year of studies, they finally presented at Fashion Graduate Italia 2019 their 9 beautiful collections, playing with the traditional concept of Haute Couture that usually wants this sector of fashion design as something classy and elegant or, at the opposite, something so hyper-creative and artistic to become unwearable.

These young designers have faced the challenge with a proactive approach, giving a modern impulse to Haute Couture never falling into banality or in the trap of extreme cretivity.

They experimented with shapes, textures, fabric manipulation and even colors, playing with the history of Haute Couture, past and future, Romanticism and sensuality. They found their personal way to communicate a message of beauty and modern elegance. And they made it enhancing the female silhouette and the preciousness of artisanal techniques, creating a very wearable Haute Couture.

ANASTASIA CHEBOTAREVA depicts with the shades of watercolors the story of a small bird, protagonist of the traditional narrative, declining the intense chromatism into pleats, stripes, flowers and metallic shades, iridescent and luminous as the dawn.


DANILO RAO brings us under the sea, from which the beautiful Japanese fisherwomen emerge like queens who mix with incredible nonchalance Rococo embroideries, ancient tapestries, fishnets, feathers and life jackets.


ESTER ORLANDINI makes a very refined game of textures, playing accurately with the fabric manipulation and the construction of the volumes, Never being to much, this is a very calibrated dance of equilibrium between modernity and ancient folk references.


HANA KATO is inspired by “Akira”, one of the cult manga of the early 90s. A dystopian, post-apocalyptic vision of a destroyed land. The young designer starts from this image to promote a desire of reconstruction, bringing on catwalk 6 women halfway between Middel Age heroins and strong warriors.

MAITAL LEVITAN answers the question: “what happens when two cultures meet becoming a unique inspiration?”. The result, in this case, can be very sophisticated and transforms the heritage of 800s American fashion and the timid elegance of Israelian traditional clothes into a contemporary mood that speaks about fraternity and cultural meltin’pot.


MARTINA GABRIELLI makes an interesting conceptual assembling between two very different ideas. On one side the French attitude and the elegance of the “Merveilleuse”, on the opposite the irreverent feminism of a cult Punk group. The decorative instances of the first one are so made more cool by the unexpected solutions of the second one.


RUSHATI CHOWDHURY explores the life in another planet, closer to our imagination and current possibilities. Maybe a not too far day we will live in Mars, but for now we can just dream. The designer makes a very creative reasoning about the red planet, the 80s shapes, the Japanese textile techniques and the flowers, something that surely misses on the Mars’ desertic surface.

SUSY MARINO is inspired by the enchanted mood of Romanticism, when the lovers used to send real letters writing on paper to express all their passion. The shapes are those of Victorian Age, but the modern spirit of the designer transformed the fabric through manipulation into origami and delicate frills.

One of the pride of Accademia di Costume & Moda is surely the course of Accessories and Jewelry Design. And the exhibition during Fashion Graduate Italia was the best occasion to show the talent of its students and, for me, to have the chance of directly speaking with them, listening their stories and maybe even testing some beautiful bags or jewel!

FRANCESCA CANTONE founded her own label “Terra Madre 62”, that represents the excellence of Campania’s craftmanship and wants to celebrate the rich beauty of this land, from the Borbonic silks to the Baroque, all helping the circular economy of local manufactures.


URTE MARIJA JURKEVICIUTE  creates a sustainable accessories collection, made in collaboration with “Italian Converter”, composed by simple rectangular pieces of 100% biodegradable fabrics and vegetable tanned leather just folded to give life to other interesting shapes.

ALESSIO ROSSI takes inspiration by the works of two artists, Egidio Rocci and Martino Camper, and decided to create hybrids of iconic pieces of fashion design, mixing parts of bags like the Peekaboo or the Birkin, or assembling two different shoes to create a double soled slingback.


IVANA BERNABÓ experiments with materials finding into the concrete, resin and leather the perfect elements to create a very refined collection of shoes. Even if the idea can appear risky at first sight, the designer manages to give lightness and resistance to the concrete, adding to it a touch of luxury with gold foils and metallized leather.

CAMILLA MASTRONARDI is inspired by the crazy and bold image of the “Club Kids”, a visionary group of performers fo the 90s. Their iconic frontman becomes the subject for a repetitive print that mimics the tartan pattern, but the real “coup de théâtre” is the bag’s compartment with all the space for a glamorous make-up and even a secret mirror.

YUTO KOTANI makes one of the most interesting and original work of concept I’ve seen during all the FGI 2019. The young designer starts from the Roman, Greek and Japanese thermae for a Pindaric flight that mixes manga, Japanes B-movies and the mosaics of Caracalla’s Thermae, working all around the concept of water as common thread of different ages and cultures. Wonderful!